Once self-sufficient, the Munda farming community in Jharkhand has accepted changes in governance that promises social and economic development. But, inclusive development has eluded them

The image of a Munda in his dhoti is a familiar sight in the fields of Khunti district in Jharkhand. However, the future of Munda tribal community is uncertain, threatened by the impacts of a developing nation. With development taking place at a fast pace, the tribal communities in the interiors of Jharkhand face greater challenges to their economy and their way of life than ever before.

From being an isolated self-sufficient agricultural economy to a group seeking new economic opportunities as social, political, economic and environmental conditions change, the transition of Munda tribal community is evident. The transition shows the struggles of tribal communities in today’s time.

Some consider Arki, an administrative block in Khunti district, a red corridor since citizens raised their voices against the government, seeking their rights. Amendments to the Chotanagpur Tenancy (CNT) Act and Santal Pargana Tenancy (SPT) Act in the recent past sparked anti-government protests in the block, with the protestors questioning the governance of the state.

Police firing on protestors that led to the death of a tribal farmer in Khunti district and similar incidents in other districts of the state brought basic rights and entitlements of the tribal communities in the country to the limelight.

Data collected in Arki block as part of a research indicate the vulnerabilities of the Munda tribes when it comes to their livelihood.

In Arki, out of the total population of 80,589, the working population including women is 44,987 as per the Census 2011 data. While 67% of the workers describe their work as their source of livelihood (employed or earning for more than six months) — referring to it as main work, 33% are involved in marginal activities that bring an income for less than six months.

Of the 44,987 workers engaged in main work, 20,589 were cultivators who owned or co-owned their fields, 6,680 were agricultural laborers. The others migrate or practice non-farm activities such as poultry and animal husbandry.

With water becoming scarce, the Munda tribes have not been able to cultivate rice, their staple food. With agriculture being the Mundas’ main source of livelihood, the rate of migration has become significantly high in the region.

The elders in the village who are totally dependent on their pension suffer the most. The National Social Assistance Programme (NSAP) that came into effect on 15 August, 1995, is meant to provide social protection to senior citizens, widows and the disabled.

However, the elderly in the Arki block do not enjoy the benefits of pension scheme. Their children are not able to support them due to various reasons. Selling hadiya, an indigenous rice beer, in the local markets is their only source of income; in some rare cases, they earn from farm and non- farm activities. 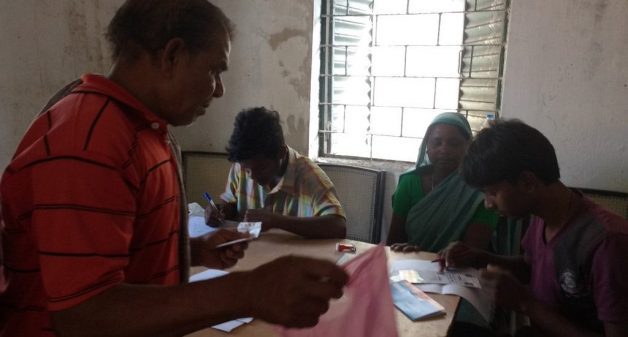 Two youth filling forms for senior citizens at a pension camp that helped many villagers avail of government support. (Photo by Tripta Sharma)

In one of the panchayats in Arki block, a high number of eligible beneficiaries of the Mundas including the elderly, widow and the disabled were not able to avail the government pension schemes due to various reasons.

A majority of them were not aware of the procedures to apply for the pension, though they were eligible. Some of them did not have Aadhaar card or a bank account or both in a few cases, to register under the pension scheme.

In order to address the above issue, developmental organizations working at the grassroots organized a pension camp, involving all the stakeholders, namely, bank officials, service providers who issue Aadhaar cards, block officials, and representatives of the community.

“All we expect is someone to show us the way, we are ready to walk on it” Hira Munda, of Rumchu village told VillageSquare.in, while filling forms for applying for the pension for the members of his community.

The government officials organized a similar camp in Sindri, Kochang and Tirla panchayats of the block. The camp helped more than 500 deserving beneficiaries.

After the success of the pension camp, workshops conducted at villages created an awareness among the tribes on various rights and entitlements. The women voiced their grievances to government officials at the block and district level. 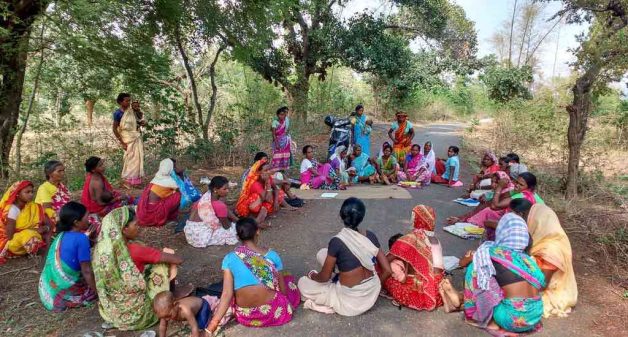 Their grievances included inability to find work under Mahatma Gandhi National Rural Employment Guarantee Act (MGNREGA), getting less than the allocated ration under the public distribution system (PDS), lack of water sources, and lack of electricity among others.

The villagers have also started receiving the exact allocation of food grains under PDS. Officials have resolved the grievances presented by the villagers of Barinijkel.

The Munda tribes are facing the impact of the overall development in the country and struggling for their basic rights. The Mundas say they were a happy people with their own system of governance.

Under their self-governance, the headman of a village or a group of villages would take decisions on matters that concerned the community. The community would resolve issues such as food scarcity and leveling of road among themselves.

With the panchayat raj system, the role of the headman has been considerably reduced. The issues that the community faces have become a part of a larger system. For instance, the villagers do not know if the leveling of road will be a MGNREGA work and if they would be paid on time.

“Nobody sees us as equals,” Lalita Nag of Rumchu village told VillageSquare.in. “People in cities and towns still think of us as hunters and gatherers.” The tribes say that they are still treated as ‘others’ in the society, though they have grown and accepted the changes.

The tribes are excluded from the mainstream development discourse that perpetuate their desire for a dignified life. Their exclusion continues in spite of many efforts. Affected by the change in their century-old self-governance, the Mundas fear about their future.

This raises questions on identity and rights of the tribes in our country that believes in inclusion and progress of all communities. The answer may lie in the government and the tribal communities co-creating spaces. The schemes, policies and the very definition of development need to be redefined and redesigned as per the aspirations of the Mundas.