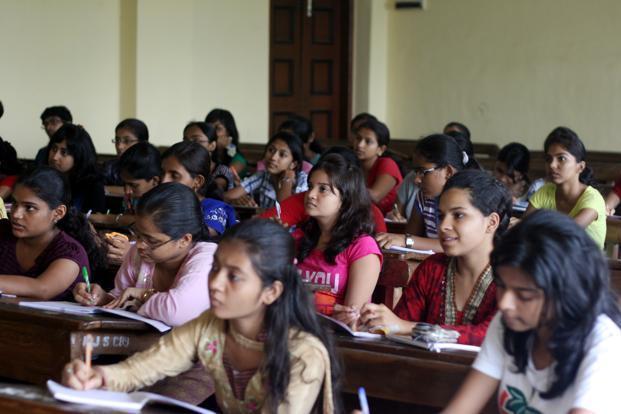 The elderly man was pleasantly drunk at 10am. He was minding the shops, two of seven, on the main road. Most people who were not out of the village earning their livelihoods, including some of the shopkeepers, seemed to have gone to the government primary school where we were headed.

The path to the school wound down the mountainside. The valley had a sharp drop, common in that part of the Kumaon region. Around a bend, the school became visible in the distance. It looked like a movie-set piece, perched on a distended platform overhanging the valley, framed by the high mountains behind. Even from a distance, it seemed abuzz with movement and colour.

Over 100 children were at the playground, which comprised most of the rectangular platform that was a natural outcrop of the mountainside. Some were painting on old newspapers stuck to the wall of the building, while others ran about helter-skelter, playing some game. The three rooms of the school, on one edge of the playground, were filled with people from the village. They were visiting the Baal Shodh Mela (Children’s Research Fair). The mela was a joint effort of the school at Syalidhar, which is where we were, and the government primary schools at Lama Singh and Raialkot, both about 2km from there.

The walls of the rooms were covered by posters with stories of two kinds—original ones written by the children, and local folk tales. The rooms were packed with visitors. The children were being called in repeatedly to explain their work. A few of them would squeeze in, but would soon sneak out, pulled by the activities outside, with no desire to talk about what they were done with. Many of the visitors’ reading abilities were limited, but they were as awestruck as those who could read well. It seemed impossible that those long interesting stories were written by their six-, seven- or eight-year-olds. Teachers from other schools also visited the mela through the day.

When the crowd of visitors thinned, Sudha Pande and Geeta Khatri, the two teachers, narrated the story of the mela. Teaching children reading and writing with expression and comprehension, and not as mechanical reproduction of letters, is one of their biggest challenges. A large proportion of their students live in homes with deep economic disadvantage. Far from having any books, many of the parents can’t read and write. Everyone is out long hours, struggling to earn a living in the steep step-fields or as daily-wage earners in the towns. The children often take care of their siblings.

These challenges are faced by almost all our public (government) schoolteachers. The complexity and difficulty of these challenges are usually underestimated, which is part of the reason why teachers don’t get adequate systemic support. Instead, they are often saddled with simplistic techniques, including packaged early language curriculum, all woefully inadequate in developing reading and writing as integral to expressive language.

The exercises leading up to the mela started six weeks earlier, sparked by a workshop that the teachers had attended. The children were asked to get local folk tales from their families. On the first day, only one child had a story, from his grandmother, which he narrated to the whole school. The fun snowballed and, within some days, each child had a story. Soon, each had many, and they had to be divided into groups.

Each of the groups had children from classes I-V, with a few who could write. In the next stage, those who could write wrote down the stories as they were narrated by each child. Then the stories were read aloud. There was a scramble for stories to be written and read before anyone else’s.

Next, each child used the written text of their own story to write it themselves with the help of those who could write well. The two teachers were deeply engaged with each group, supporting each child. This exercise went on for five weeks with variations, such as days being reserved for creating original stories. Over this period, the children became more and more independent with written language. The last week was spent preparing the exhibits.

The two teachers were as awestruck with their own experience as the visitors were with the exhibits. They had never seen such progress. Those who were beginners had made progress that used to take a year or more. Students already familiar with writing had gained fluency and become substantially more expressive. But their greatest sense of achievement was that all children had become keenly interested in reading and writing.

The two teachers attempted this pedagogical experiment with enormous effort. The mela in itself played a crucial role, energizing the teachers and students, engaging the community and teachers from other schools. But the real value was in the overall experiment, especially for the two teachers, who developed an effective approach for language teaching.

No official had asked them to do this. No official stopped them either. Their desire to get their students to learn better had fired this effort. This fire, or its early sparks, are there in a large proportion of our teachers. We need to fuel this fire. India’s educational challenges can only be addressed by such efforts of engaged and capable teachers in school. All efforts, at all levels, must be informed by this reality. Not by grandiose ideas cooked up sitting on perches of power of policy or academia.